Only in Greece and Latvia, that require an investment of 250,000 euros for foreigners wishing to settle in their territories, you can find more valuable Golden Visa schemes than in Portugal.

In Portugal, the Golden Visa bar remains at 500,000 euros - for property purchases - since the scheme (officially designated by the Residence Permit for Investment Activity) was created in 2012.

20 countries have visa granting programs through investment, according to ‘Expresso’ newspaper.

Cited by the publication, Susana Coroado of Transparency and Integrity, a nonprofit public association, said Portugal is one of the countries that most attracts these investments. "There were times when the number of visas issued in our country was ten times higher than the United Kingdom," he said.

“Portugal has an advantage of confidentiality. Malta, for example, publishes the names of people with Golden Visa every year. That is the big reason why we never had a serious scandal” warned Susana.

According to the publication, this association advocates for greater transparency in the Portuguese program, where the information that is made public is the one taken over by the statistics of the Immigration and Borders Service (SEF): number of residence permits assigned, main nationalities to which they were assigned to, total investment and the type of program through which the Golden Visas were obtained.

Photo by Luis Dille on Unsplash 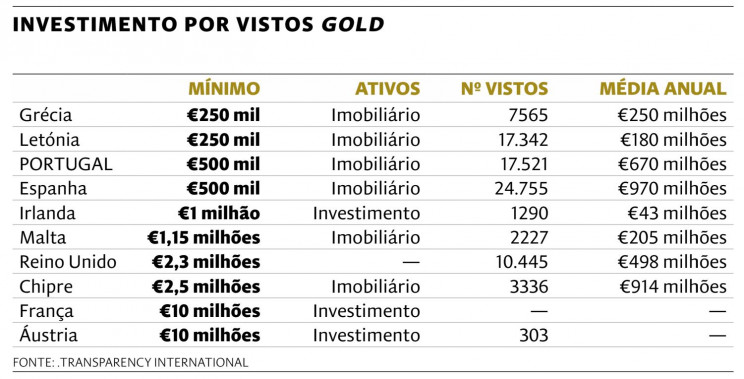 Our website, like many others, uses cookies to help us customise the user experience. Cookies are important to the proper functioning of a site. To improve your experience, we use cookies to remember log-in details and provide secure log-in, collect statistics to optimize site functionality and deliver content tailored to your interests.